Ever been inspired by a childhood movie. Sisterhood of travelling pants, the lizzie McGuire movie or Monte Carlo. This film came out in 2011 staring Selena Gomez, Leighton Meester (Gossip Girl; important for later) and Katie Cassidy. Monte Carlo does not disappoint those fantasies. This film is about three you women who travel to Paris and then fake a celebrity get put up in the Hotel de Paris hotel and have keep up the pretence. The film shows an idealistic view of a trip to Monaco which may be as magical as you imagined it. Well Monte Carlo does even better.

Sat up on the hill is the Prince of Monaco’s castle. Monaco is a separate state from France. However, if the Prince of Monaco is not able to produce an heir, constitutionally Monaco becomes part of France again. Prince Rainier married actress Grace Kelly in 1956 after facing this conflict. She became the Princess consort of Monaco until her death while driving and suffering a stroke on the way home from Nice. The palace is now inhabited by their son, the now crowned Prince and looks over the city.

The main attraction of the city is the world-famous casino. The casino was brought in when the economy of Monaco was suffering. You can only gamble in it if you are a visitor and the citizens cannot. This is to ensure that money is brought into the city and the residents do not lose theirs. The casino makes 3% of the countries revenue per year. It is smaller than you may expect but just as grand. Ensure you bring your passport and dress smart. 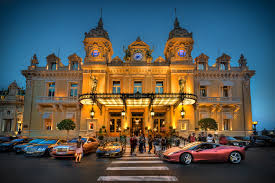 The local area is roaring with expensive shops and restaurants. The prices in the city may be high but it is worth the experience. The city has some of the lowest crime rates in the world but is one of the most densely packed population over a small land area. The hotel de Paris sits right next to the casino. The bar is worth a visit but a night in even the smallest room may cost a year rent. If you want to follow in the foot steps of Selena Gomez it is worth having a look around.

The night life is incredible. There is a famous buddha bar down the road from the casino. Each cocktail is around twenty euros but there most exquisite alcohol ingredients are used. The McDonalds down the road has one of the best views out over the Mediterranean Sea. However, the best view can be seen from the Fairmont hotel.

This hotel is close to the main casino. If anyone is a Gossip girl fan it is worth visiting the rooftop pool and bar to feel like you are in the classy world. It is expensive and the rich people hang out there so make sure you wear your best clothes. I was in a designer dress and I still felt like the lower class. The rest of the city has night clubs, casinos and beaches. There are incredibly expensive cars driving around the city like its normal and the rich and famous crowd the city to enjoy the summer.

Monaco is a one in a life time place to visit. Maybe as it is so expensive. However Nice is only a half an hour bus journey away and very affordable. There are also air BnBs cropping up with reasonable prices. The place is expensive to visit but it is worth every penny so maybe save up and dress up for this one. But the Instagram pictures are worth it!