From the writers and producers of Heathers comes the smash hit Mean Girls the musical a dramatisation of the famous 2004 film and recent book by Tina Fey (Miss Norbury actress). The show is very recent to Broadway only debuting within the last two years. It follows the plot line of the Mean Girls film but with some modern tweaks of slang and social media to bring it forward into this decade. This may not be a film you would expect to make a good musical but DAMM they have done a great job. There is comedy, suspense and heartbreak just waiting for the audience.

If you have never seen the original film “Mean Girls”, shame on you! It is the defining film of the female generation of the 00s. The film featured Lindsey Lohan, Amanda Seyfeild and Rachel McAdams. This film was some of their break through rolls. Cady is a home school student who moves to the school from Africa and falls in with the popular crowd. Her friends and her plot to bring down the queen Regina until she becomes swallowed by the world herself and has to earn back the respect of her friends a peers/
This film has some of the best one liners ever that you can spend a good twenty minutes quoting lines to your friends. Even after 15 years since its release. It is one of the most popular teen films grossing $129 million dollars.

“If you’re from Africa, why are you white?
OMG Karen you can’t just ask people why they are white!”

“Ex boyfriends are off limits to friends, that’s just like the rules of feminism.”

“On Wednesdays we wear pink!”

There is no original music from the film but it follows along the same musical theme as Heathers. If you loved that score then this will be another musical for you. I feel it is aimed at a younger teenage audience but it will delight anyone who goes to see it. Cady, Janice and Damien appear at the start. Barret Wilbert Weed is cast as Janice (previously Veronica in heathers.) and has instant chemistry with Damien who is perfectly cast. They introduce new songs cautionary tale and where do you belong to get the musical started. The sass and tone of the show starts from the moment the stage lights up. 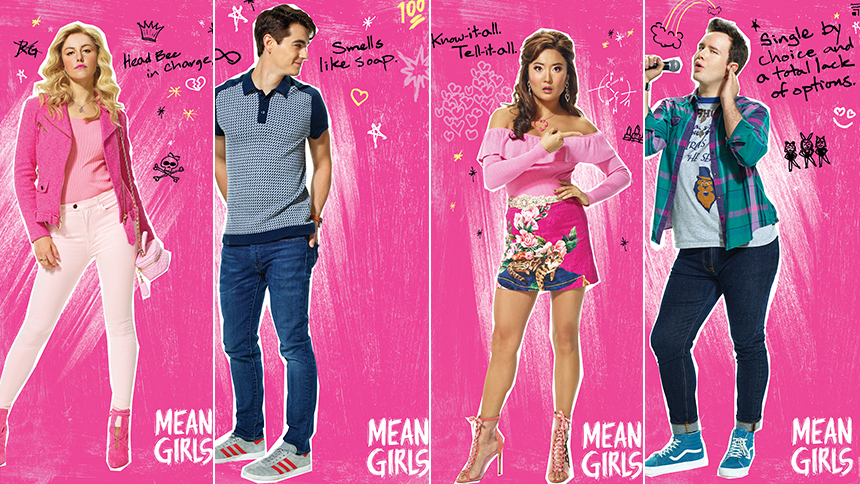 The plastics are introduced by a song meet the plastics which describes the personality of each plastic. Gretchen is obsessive and critical and desperate for Regina to like her. Regina is a hot goddess but evil and drop dead gorgeous. Karen is played slightly more extreme dumb blonde but I think she steals the show with her one lines and comedic timing. Gretchen sings what is wrong with me which is very befitting of her character. Karen sings Sexy which is my favourite song out of the whole score which is priceless, hilarious and catchy. Regina gets a few numbers to herself which shows off her evil nature. The songs are relevant to this time period but also show the dynamics and social pressure that each character has to adhere too. Check out Karen’s catchy number;

The main songs which make up the story are Apex Predator, Revenge Party and Rather Be Me which fill in the story and make way for a lot of relatability and drama to be added into the story. The ending is slightly deeper than it is in the film with a lot more self-reflection and making amends for all the wrongs with every character learning that they are not the victim. If you look closely the female population grows as the male ensemble dress up as teenage girls during the last few scenes. This show can touch anyone and the message is clear, be kind to each other!

This musical is new but a definite must see. It is incredibly popular and the tickets are expensive so try to book in advance. Though the theatre is small so you are bound to get a good view no matter what the price. There is no word of it leaving New York yet but I think this musical is going to grow the more publicity it gets. Check out the musical album on Spotify and you will be sold instantly!