The best musical I have ever seen!!!

Anastasia is the film of a lot of millennial’s childhood films. Based off the story of the fall of the Russian royal family the Romanovs. Two of the princesses were said to be missing from the rest of the bodies of the family’s when they were rediscovered creating the legend that the youngest daughter Anastasia may have survived. On the 17th of July this year it will be 100 years exactly since the Romanovs were assassinated including the real Anastasia. Over the years the missing heir to the Romanovs came forward who were all frauds but her body was discovered in a different grave in the 90s. But the legend and the romance of the grand duchess Anastasia was captured beautifully in fox’s movie Anastasia (1997). 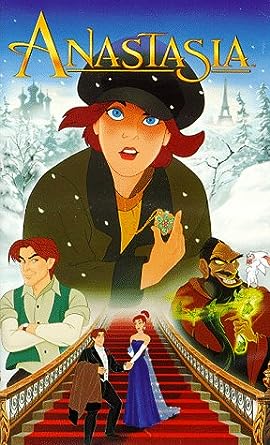 For those of you who have never seen the film (HOW??). The films start with Anastasia singing a secret lullaby with her grandmother the night before Rasputin predicts their downfall. They become separated and Anastasia ends up in an orphanage until she reaches 18 and is amnesic and called Anya. All she knows is she has someone waiting for her in Paris. Vlad and Dmitry get Anya to pretend to be Anastasia to fool the dowager empress into getting the reward. However, they are pursued my Rasputin and need to escape out of Russia to Paris. Anastasia finally remembers who she is and has to decide whether to follow love or return as a ruler.

The film captured the hearts of many people. The story has amazing beauty about it. She is also a princess who actually lived and breathed within the last century. People also relate in her hope to find acceptance and understand who she is in the confusing world. The film has humour and drama as well as an amazing original soundtrack. Music by David Newman and the voices of Meg Ryan and John Cusack are some of many that bring the music to life. The top songs are “Once Upon a December, Journey to the Past, Rumour in St Petersburg, learn to do it, meant to be and Paris holds the key to the heart” are the most catchy and memorable. These are also the songs that have been adapted and added to the Broadway production of Anastasia.

The Broadway production was originally pitched in 2012 with Derek Klena as Dmitri, John Bolton as Vlad, Christy Altomare as  Anastasia  and the amazing Ramin Karimloo as Gleb (The villain). The show premiered on Broadway in April of 2017 on the centenary anniversary of the fall of the Romanovs and the twentieth anniversary of the film. The show contains the original songs except Rasputin’s and turn the musical into one where the soviets rose up to power in communist Russia and took down the Romanovs rather than the supernatural Rasputin. This is historically accurate and is highly relatable for the era which the songs fit very well into. The music from the film was no where near enough to complete the musical so another fifteen songs were added. But once you hear them you will forget they were never in the original film. The music makes my soul fly!

The back story of Anastasia’s childhood and the relationship with her grandmother opens the show with a short rendition of once upon a December which follows by the Romanovs being brought down by the Russia people. Mary Beth Peil played the dowager empress originally and I am not sure who is currently playing her. The show moves on to the twenties showing a new communist Russia introducing Gleb talking to the crowd. “Rumour in St Petersburg” starts and introduces Dmitri and Vlad and their plan to create Anastasia. The find the music box and Anya appears as a vulnerable street sweeper and is assisted by Gleb.

The scenes move on to Anya looking for Dmitri to get exit papers and they train her up to be Anastasia. She sings “In my dreams” which describes how she survived the assassinations and was left without a memory of who she is. They sing “Learn to do it” after with Anya dropping hints of her memories and the chemistry between her and Dmitri. John Bolton has Vlad spot on and he is hysterical in the role. I thought Derek Klena was also perfectly cast. Christy is short and feisty and my god that girl can sing!

Ramin Karmiloo as Gleb was perfectly suited for his voice. I absolutely love him but his voice is out of the world. He sings “Neva Flows” to Anya and his voice just over powers anything else. Even above the entire chorus. I nearly knocked my friend over when I realised, he was performing! The song “My Petersburg” follows where Dmitri tells Anya about his past. They bond over their shared stories of their survival on the streets and Anya shows exactly how tough she is. Dimitri then gives her the music box which she opens and sings the hit “Once upon a December” where her family come and dance around her in her vague memories reflecting the scene in the winter palace from the film. 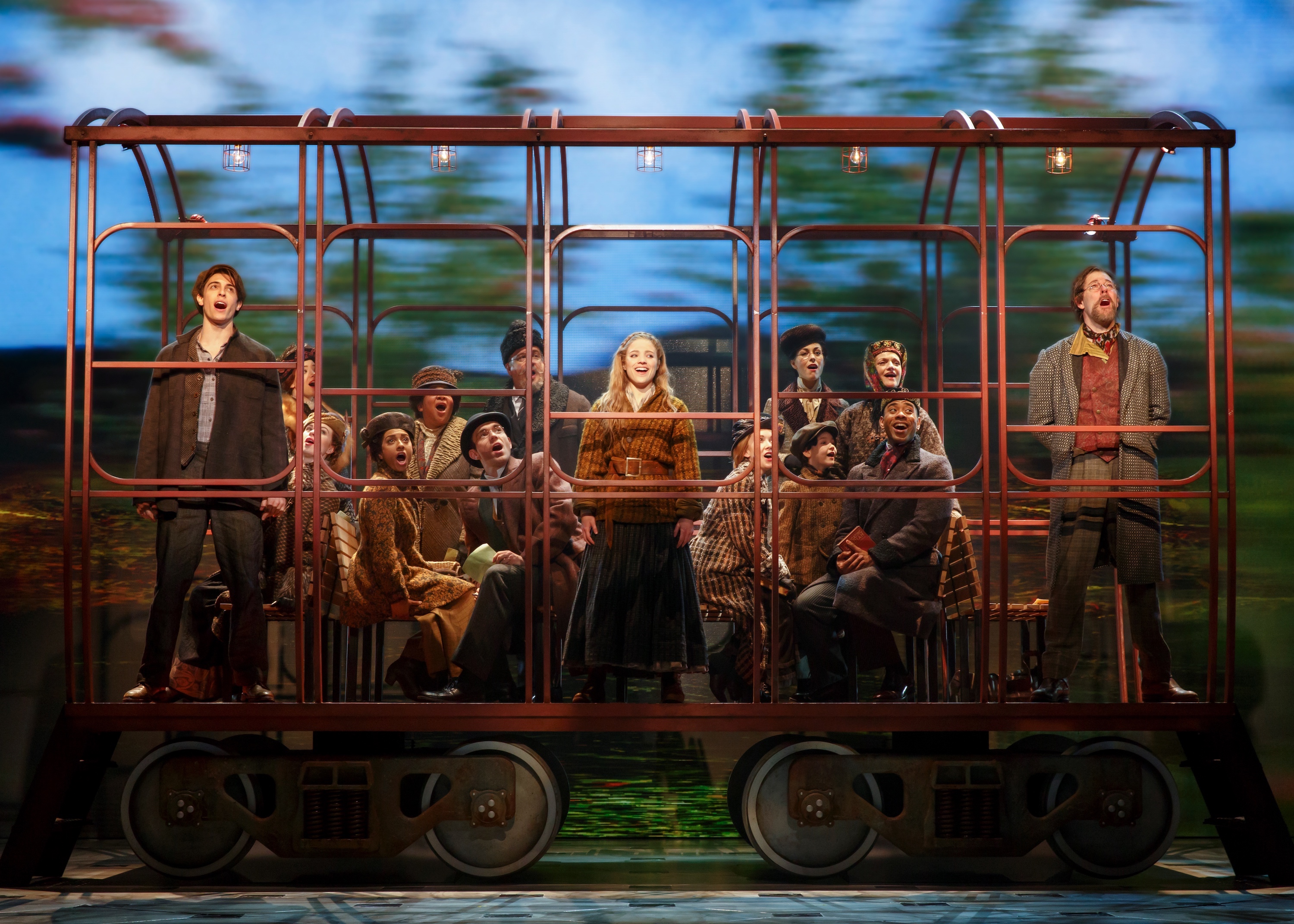 The scenes move to a clever train scene where Constantine Germanacos (now gleb) sings “stay I pray you” to evoke the sadness of fleeing their own country. His voice is incredible too and he makes a fantastic Gleb. There is a funny triette performed in layers of their dilemmas they are facing and whether they should be doing this. They flee off the train for Hungry and Gleb sings “Still” as he is sent after Anya and questions if he will be able to fulfil his orders. The first half ends with the trio reaching Paris and “Journey to the past” closes the first half. This is the most famous song from the film and Christy slays it.

The second half opens with a costume change and they perform “Paris holds the key to your heart” which is the last song from the movie. Anya sings “crossing the bridge” as she contemplates knowing this bridge is special being dedicated to her grandfather (Ponte le Alexander) and she goes to the town. The Russian aristocratic club is introduced with the “land of yesterday” and countess Lily; Vlad ex crush. The pair sing the “countess and the common man” which has a lot of improvisation and hilarity. John is properly my man crush at this point and they do a lot of physical commentary as he woos her into letting them see the dowager empress.

The dowager empress sings “close the door” as she refuses to see any more Anastasias. Anya wakes up from nightmares and is comforted by Dmitri where they sing “In a crowd of thousands” where she finally remembers who she is. They go to meet the dowager empress at the opera and while the ballet is performed; Gleb, Anya, Dimitri and the dowager sing “Quartet Ballet” together which amazing harmonies evoking the anticipation of each character’s stories all coming together. Anya meets the Dowager but she refuses to recognise her until they share the music box and they are together at last. 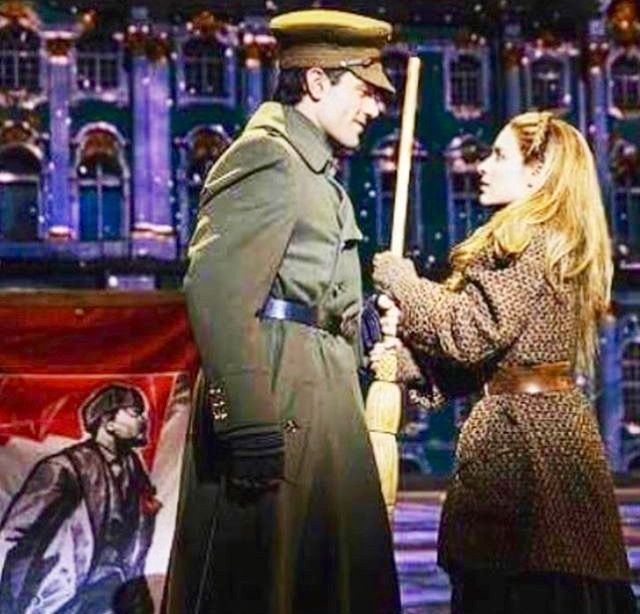 In the last scenes Gleb confronts Anya and makes to pull through on his orders. I’m not you listen to Still/Neva reprise because Ramins voice is out of this world. He over powers the whole chorus and put such emotion into his voice that it gets me every time I listen to it. Now I’m going to stop there before the end. I don’t want to ruin it if its happy or not. But you have to go and see it. The show if hilarious, beautiful and it is coming to Europe!!
The tickets on Broadway are not extortionate and it is so popular it will be around for a while. I will be sad to see John Bolton go but the cast will do an amazing job. I wasn’t over thrilled with the new Dmitri as he didn’t have the same emotion in his voice but Christy works amazingly. The new countess Lily is amazing too and Germanicus does a great job in the role of Gleb.

I will be seeing this show again this year. I am in love with it. I will say that it has over taken Phantom as the best for me. I don’t think anyone will ever beat the original cast. But it is currently in Spain and Germany. I am going to Stuttgart to see it entirely in German this year which will be a challenge. I may take an earphone to listen to the songs in English if I need a break but it is going to be my challenge. Germany also do their own musicals which will be interesting to compare. 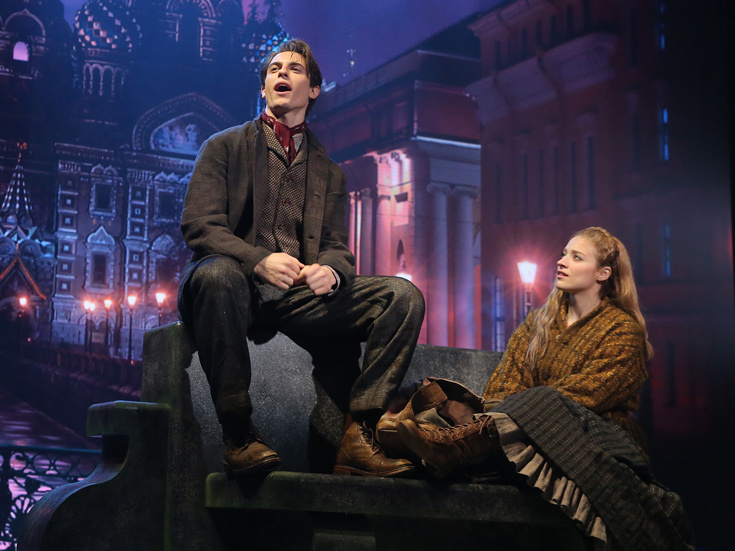 I highly recommend this show to any fan of the film, they have done it justice. You never know what song may hold the key to your heart! I hope Anastasia will make its way home to the UK at last!

Since finishing this article I have since discovered the news that Anastasia is ending its run on Broadway as of the 31st of March. I am personally gutted even though I do not love live anywhere near close enough to see it regularly. This show has been on for 2 years and I feel it has such a longer potential run. It will be in Germany until September of this year. I hope to god it makes it to the UK for a run on the west end or a tour. As it is beloved by the millennial and will steal the stage. Please bring it here!