Waitress is a very new musical which has taken the stage by storm in America and has finally come to the UK. The music is written by Sara Bareilles and is focused on the pregnancy journey of a Waitress named Jenna. London’s west end had Katherine McPhee playing Jenna at the Adelphi Theatre. She is not so well known over here and isn’t a big theatre name but she has one of the sweetest singing voices I have heard in a while.

The story starts with three waitresses working away in a pie shop. The creating and mixing of different pies is the main metaphor used throughout the production. Jenna is the lead getting a pregnancy test with her fellow waitress friends sassy Becky and weird, awkward Dawn. The open the stat of the comedy performances with “focus on the negative” in hope of the pregnancy test being negative. Becky is performed by Marisha Wallace who is sassy as hell with insane comedic timing. Laura Baldwin plays Dawn like that geeky friend everyone has who never seems to get lucky in love. The story highlights all of their love lives.

Jenna is pregnant and with an abusive boyfriend who she cannot afford to leave. He is possessive over her and wants her to love him over their child as demonstrate in forcing her to sing “You will still be mine.” He is selfish and pushes her to her limits throughout the show. She finds out there is a pie cooking contest that she can enter and if she wins, she can get away from him. Her relationship with her boyfriend reflects her mother’s abusive relationship.

Jenna has several ballads to convey her feelings and internal turmoil throughout her pregnancy with the best song being “Dear baby and She used to be mine.” These songs bring tears to everyone in the audience and gets the crowd on their feet. Jenna falls for her gynaecologist who is played awkwardly by the handsome David Hunter. He is adorable and the pair of them have the best chemistry but are continually walked in on by the nurse, who has some things to say about their affair. The best song is “Bad Idea and you matter to me”

The high light of the London show is when Dawn meets a guy online. Ogie who is played by the GENIUS Jack McBrayer who has been on big bang theory as penny’s brother and wreck it ralph. He completely nerds out singing “Love you like a table” to win Dawns affections. He is hysterical with his comedic timing and mucking about on the stage which left me in stitches. I could see Jack springing off the stage after the crowd’s insane applause. The highlight was seeing him and dawn dressed up as American period folk doing It sewing the American flag. He is incredible and can also sing incredibly.

The end of the show has the child being born and Jenna kicking the father out and ending her relationship. But I feel like as a forward moving feministic film she shouldn’t have been left the pie shop. I feel the message would have been better is she had won the competition and earned the pie shop rather than being left it by her kind boss. In real life not everyone is that lucky. The story should have conveyed there was nothing holding her back and she could get the dream she wanted with work. That would have been stronger rather than the rushed happy ending with an act of a friend. 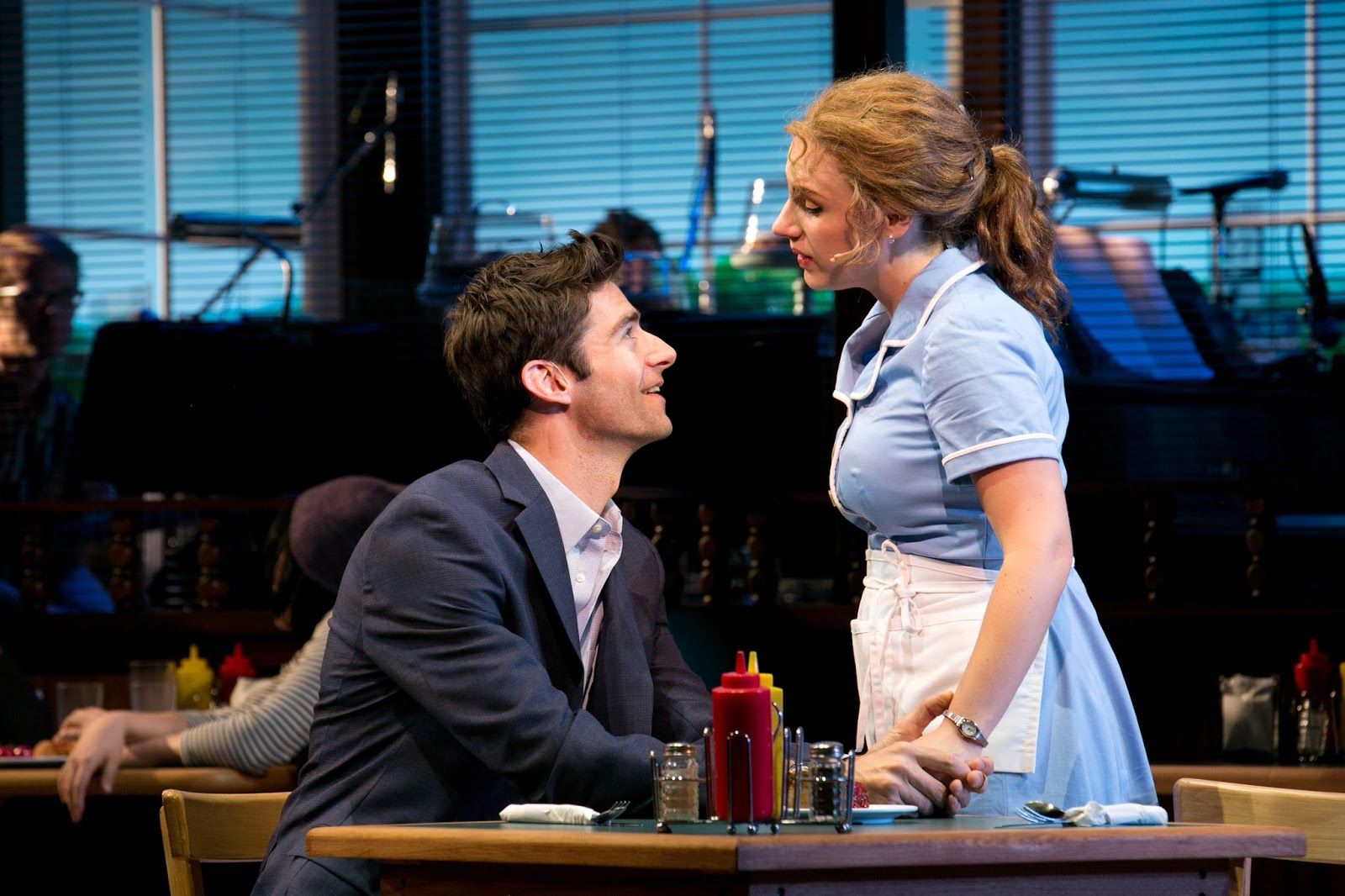 Overall, I thoroughly enjoyed the musical. I wouldn’t be desperate to go and see it again but the music and comedy was impeccable. I think Jack stole the show. The chemistry between the characters were incredible. I just feel the ending could have been a lot stronger. Please do go see this show while you can as it is only in London for a few months and it may not be on in America again for a while!!

Maybe for JAck though!