What species and where to find them?

These are small burrowing sea birds which visit Scotland every year. It has a colourful large bill and adorable personality. They visit the coast with cliffs with lose soil in which to burrow in. They raise a single chick or sometimes two. They feed on sand eels which are in huge numbers in Scotland, but recently due to over fishing and climate change. These numbers have been reduced. These birds spend the rest of the year at sea.

These birds look like small black headed penguins. They are black apart from their stomachs and their bills are bright yellow on the inside. They nest in large colonies on cliffs and can fish at 150m for sand eels.

Gannets are large sea birds and half the worlds population nest in Britain. The best place to see them is North Berwick where they nest on a crag off shore. There are so many of them they turn the island white. They are white with black tipped wings and yellow heads. They dive at 60mph to spear fish. They warm their egg using their feet rather than their stomachs. 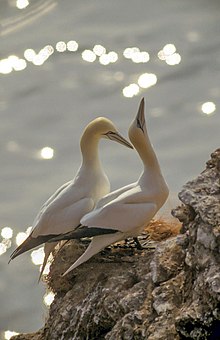 These are ground nesting birds which travel to Britain every year. They are said to be the animal that receive the most daylight as they migrate from Britain to Antarctica. Giving them the longest migration of any flying birds. They dive into water to catch their prey and feed their chicks. They nest in large numbers on grassy meadows. You can tell they are there as they may attack or scare you off if you come near the nest. They can be observed safety from the south shore of the Ythan estuary of Newburgh. 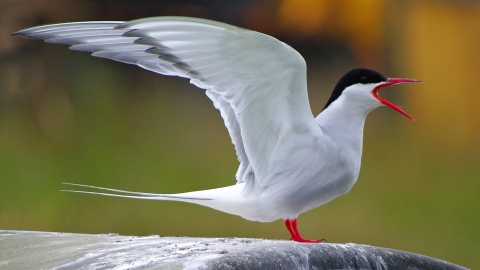 Like the artic tern these terns are bigger and ground nesting. They eat sand eels and fish but they migrate to south Africa. These birds are big with a large wing span. They are called bonksies as they will swoop down and bonk you on the head in their territory. This can hurt. If you raise a hat n a stick over your head it will give them an easier target.

The best place to see most of these birds is Shetland. You may need to endure the rough Scottish weather and some perilous boat rides but the outcome is worth it. The season is short as these birds are only here from end of April to July so make sure you make the time to go and see them!