This post is coming a little bit late and with Aladdin finishing in the west end in October I feel like it has to go up so that people have the chance to go and see it before it finishes. Aladdin came to the west end after its roaring success on Broadway back at the end of 2016 which is when I actually saw it. Yup it’s been that long. Building on the success of the original film and now the live version this show has gone from strength to strength and I am happy that it is going to be ending its run on such a high note.

Just in case you are in the five percent of the population that has never seen Aladdin. It is a film based on the kingdom of Agrabah where a young man is struggling to make a living falls in love with the princess who has to marry a prince before her father dies. This film had the amazing Robin Williams who set the bar so high for the genie he is a tough act to follow. The film has the classic songs but the most famous of all is “A whole new world” which any girl will get up and sing on a karaoke night.

First thing you notice when you take your seat in this theatre is the atmosphere is tantric. This is a younger audience aimed show. The kids bring a new level of excitement to the show that you may not find in some of the other classics which aren’t suitable for the younger audience. This show goes above and beyond to blow your mind if it’s not with the amazing cast, incredible music or visual effects. 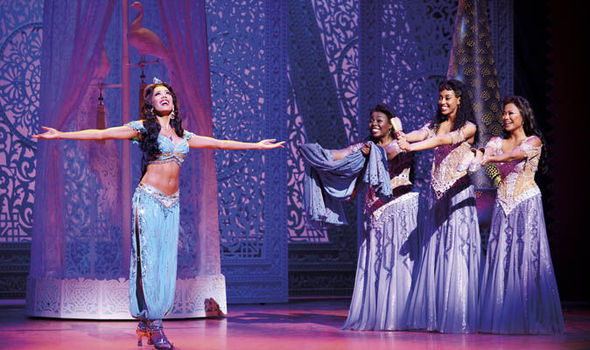 My favourite song is “Arabian night”. Always has been with this film and the show. It enters the show using this song to introduce the cast members and push through to get to the point where Jasmine meets Aladdin and pushes forward into their love story. The story is slightly different in that Jasmine has a lot more to say and even her own song which I prefer to the original movie but Aladdin is perfectly cast.
When it comes to the caves of wonders and the Genie appears the show goes down a more showbiz alley. The Genie has his own sett which is about ten minutes long but it is amazing and even involves a little bit of improv. It will get you on your feet and its probably the best number in the show. Prince Ali is the second biggest number in the show when his procession enters the city. The production has gone out its way to make this a mind-blowing display the only which I have seen the likes with is in Miss Saigon. The props and visual effects are outstanding. 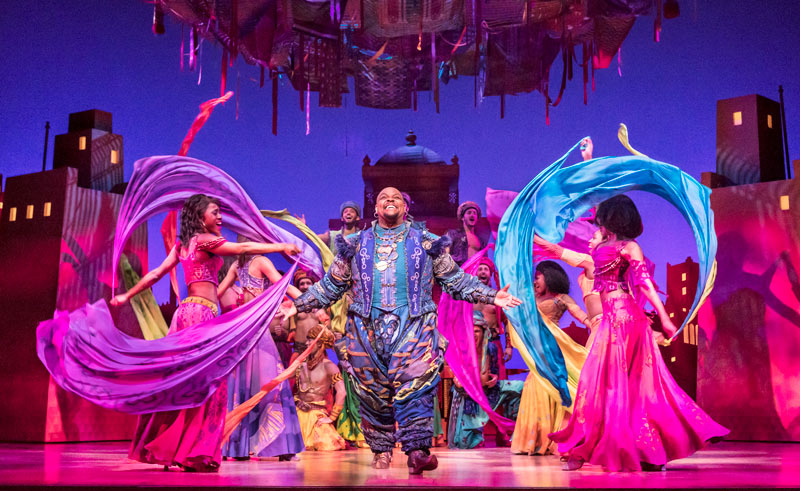 A whole new world involves Jasmine and Aladdin flying around on the magical carpet. I’ve got to admit I am incredibly jealous of the actors getting to sing and ride on the carpet. The moment is beautiful and brought me to tears when I watched it. This is the most iconic moment of the musical and they did it proud.

In the second half with Jaffar’s rise to power I feel he is much darker than in the film which does give the show a hint of pantomime but it does not affect the overall standard of the show. I want to leave the end of the show and update it when the run has finished so as not to spoil it for anyone. This is a show that anyone can go and see and have a good time. It might even be one of the best to start with if it is a young person’s first musical show.

Get down to Prince Edwards theatre to get your tickets before it’s too late!

One thought on “Aladdin”