The new production created by the geniuses of Mischief theatre who have brought us The Play That Goes Wrong and A Comedy About A Bank Robbery. This is a brand-new show which will only be running for month at the Vaudeville theatre on the Strand in London. This play had the original writers performing in the show as well as some of the actors from the previous productions. These included Henry Shields, Henry Lewis and Jonathon Sayer (who wasn’t appearing on Friday.)

I did something stupid before going to see this production. I love this production company and will happily go and see any of their shows. But I read the reviews and I was down heartened to see a fair bit of negativity. Some even gave it two out of five stars. This wouldn’t have stopped me buying a ticket yet I was already starting to have my doubts. Their previous work has left the bar very high and sometimes it can be hard to live up to. However, in this case the met the bar and soared high above.

The play starts with the characters in the early stages of school. The props are all exaggerated in size to mimic what they were like as children. The wit and humorous jokes made from the innocence of a child is just priceless. The start of the characters foundations and behaviours are built in this part. But the work from the props really make the scene. The set is changed as the characters transition into their teenage selves in high school. Nancy Zamit who plays Moon is particularly hilarious. She adapts so well to each life stage of her character and has the best lines. She is the perfect queen bee of the group. In this part of the show the fire alarm went off and the show was paused for a second but she jumped right back into character with one of her best lines which had the crowd in stitches.

The story built up the characters as Archie (Henry Shields) being the academically challenged guy who was falling for Katie (Charlie Russell). I have not seen Charlie perform before. She was not quite as good as the others with the comedy but she brought drama and emotion into the production which may have been slightly lacking otherwise. Spencer (Henry Lewis) was Archie’s best friend and was in the closet. The back story of Spencer was he was in love with Archie and his jealous drove a wedge between him and Archie when Archie developed a relationship with Katie. The last character Simon (Jonathon Sayer) was the loser who followed the group round but was helplessly in love with moon brought the best comedy to the sketch I feel. The first have closed with Spencer ruining Archie’s chances at getting into the next year.

The second half fast forward to the school reunion with all of the characters now in their thirties. Spencer is married to Katie now but still harbours feeling for Archie. The twist is that so does Katie but Spencer is still closeted. Simon brings a fake wife to try and impress everyone at the reunion which brings some of the best comedy of the show as the pair of them hopelessly try to sell their relationship. On discovering Moon is getting divorced he tries to break up with his girlfriend but continues to do it in-front of the wrong people. 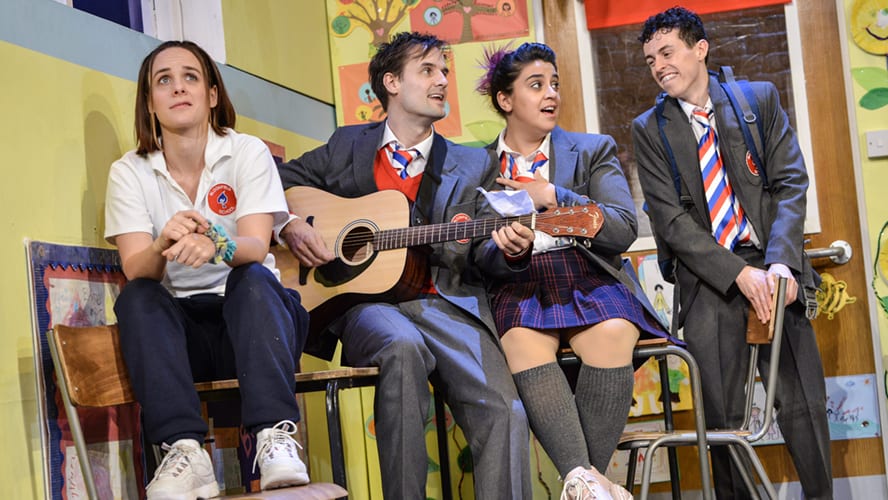 There is a running joke through the play of Archie being a hamster killer and the gag just keeps giving and giving. In all the kerfuffle, Katie accidentally discovers Archie’s paper which Spencer sabotaged. This leads to an emotional climax where the three characters have it out together and Spencer finally admits his feelings for Archie while leaving Katie distraught. This led me to shed several tears and gave a heart-warming ending.

I have failed to mention the star of the show Paul (Dave Hearn who nearly killed me with a prop in the play that goes wrong) being the crazy guy with all the stories. He was absolute nuts and sleighed me but no one could remember who he was and it turned out he went to the wrong reunion.

Overall this play had the clever dynamics of set design and gags as all of the productions that mischief theatre has produced. This story brought in a bit of a deeper story line as well as the jokes. It may be their strongest story yet but it didn’t leave me howling as hard as some of their other shows. Yet this play is a master piece of originality and unique production which hasn’t been scene in theatre. It managed to balance the humour and balance the seriousness of some of they issue they highlighted which haven’t been scene in any other productions. Some parts could have been tidier but I really enjoyed this show.
I would recommend someone to go and see it. I don’t think I would rush back to see it soon but I would go see it again in the future. Unfortunately, it is only running for about another month so if you want to go and see it you better get a move on before it is replaced by when magic goes wrong.
Overall, I go against what the critics say and give this production a 4 /5 stars!