So, I discussed this musical after seeing a snippet at West End Live and I was so excited to go and see it. This is also the last show that I will be seeing in 2019 and the last show of the decade (Pause for dramatic effect). I saw this show in Edinburgh. I feel like I live at the playhouse theatre as this is the third time I have been in a month. I had a seat right up the back so I couldn’t see the finer details of the show because I forgot my glasses. But the sound didn’t really travel up but for £13 I don’t really have the right to complain.

This musical is written by Dolly Parton and is loosely based on the film. Follows the story of three different women working under the leadership of a sexist boss and events take an unexpected turn. This also stars Amber from Love Island and my word that girl can sing. It’s great to see her making her dream come true of performing on the west end.

The show starts off with Judy (Amber Davies) joining the workforce in a sole destroying office. Violet (Louis Redknapp) is the strong ambitious boss who leads the office and is working hard sucking up to the arse hole boss (Sean Needham) to get a promotion. Doralee (Georgia Castle) is he boss’s stunning assistant who is sexually harassed and misjudged by other women in the office.

Through out the story the girls become fed up of being walked all over and get their revenge on the arse whole boss. I love the casting as the woman who played the leads Amber and Louis have been brought to fame through their partnerships or by love. This show is about the girls taking back the power and realising that their happiness doesn’t depend on a guy being in their lives. His is a strong message but the story let down the importance of this message which was lost in the second half.

During the first half I love the visual effects with Dolly Parton singing with the cast. The boss has an incredibly funny and crude song about what he wants to do to Doralee which had me in stitches and for once the show doesn’t let him get away with it. One of his lines was “she must be on her period” which got hissing from the woman in the audience and intake of breath from the men. These kinds of jokes are beginning to be close to the acceptable line.

The characters have a lot of songs about how they would want their lives to be but they don’t take it back until the end. When they capture the boss and tie him up in a gimp suit, he is left suspended over the audience while the curtain falls. But the ending is pretty abrupt as the women get promoted and the men get conveniently sent away and they are left in charge.

I feel like this year has been the year for feminist musicals and it is a theme we have seen across several. We will rock you tried and failed. I think 9 to 5 had a good message but it wasn’t as well executed as in Waitress or SIX. I didn’t leave feeling as empowered as I did from the others but I had a good time. I think this is a good show to go and see but it won’t be up there in my memory. I certainly haven’t sung any of the songs after unlike SIX which I have become obsessed with. I hope next year there will be some musicals which really get their hands on the feminist message without the gags and a stronger story line. These shows need to be made but they will only make a difference if they can make an impact on the audience. 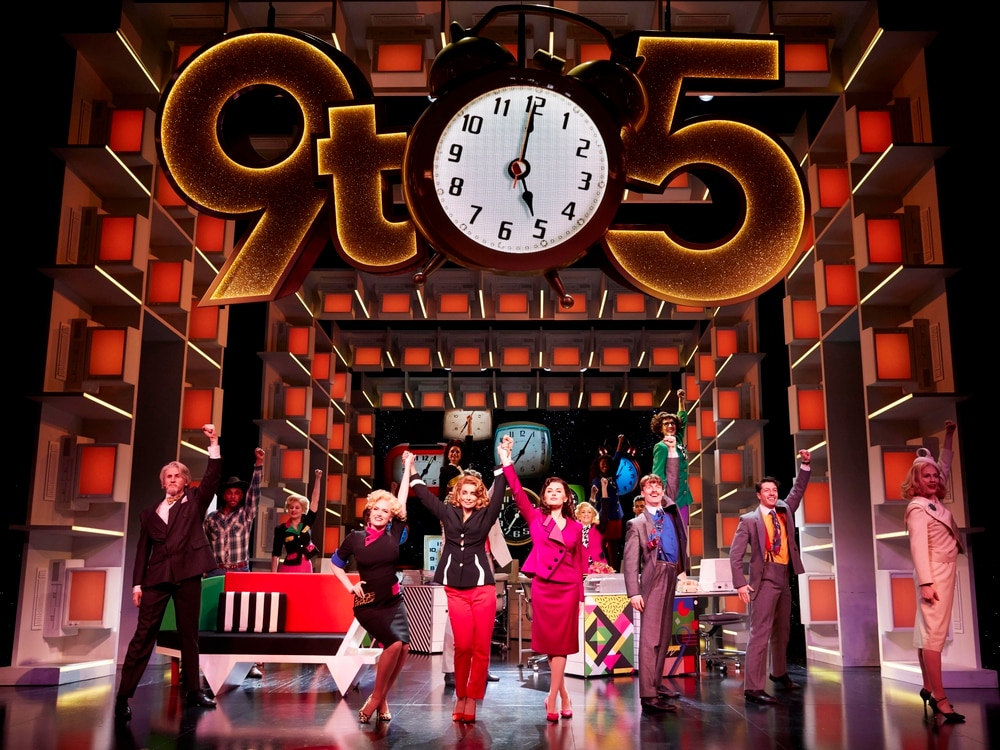