For a long time, people have been telling me to go and see Woman in Black. This was my first and only horror film I have ever seen as it traumatised me so much. The idea is so realistic and intense it makes it even scarier. The 2012 film featuring Daniel Radcliffe was incredibly jumpy and creeped me the fuck out. Some how I was convinced to go and see it in the theatre on the UK tour to Glasgow.

As always there will be spoilers so if you don’t want to hear what happens then stop reading now. But if you want to hear about how I didn’t sleep again for a week then keep on reading. The start of the show contained a little bit of humour and character building with the man who experienced the ghost trying to dramatize his story. He has an actor come to help him develop the story and we have two parts of the story being told at once, with the old man playing all the other characters.  Arthur experienced the ghost and played the extra characters and the actor played Arthur.

Arthur was sent to the god forsaken town by the coast to tend to the affairs of an old lady who lived out in a house which was separated from the land by the time and salt marshes. The heavy mists could come in from the sea and completely disguise the house. The old woman who lived in there was a widow and had lived alone for over sixty years. Arthur and a man from the village were the only men to attend her funeral. As the sermon commences a black veiled woman makes her way through the audience onto the stage and stands behind the men. He faces cannot be seen but she looks old and hallowed. Arthur jumps and scares the audience and she continues to appear and disappear throughout the sermon. The other man refuses to look for her and is over come by fear. Arthur cuts the scene as he is too overcome by fear from recalling it. Arthur goes out to the house to attend to the affairs which is going to take several days. He finds a room which is locked. After exploring the house and the grounds he goes out to the salt marsh which is hardly visible through the fog. He thinks he hears a horse and cart crashing and falling through the fog with the heart wrenching scream of the horse as it falls. The noise cuts through the audience and the scream of the woman scares the life out of them from behind. Arthur then returns to the town with the aim to stay in the house to finish his work. The cart driver insists that he take his dog with him.

Once the house he worked through the papers and goes to bed. The audience watch him sleep peacefully to wake with a shock which startles the audience. There is a creaking noise coming from the locked room. He wraps on the door knowing he is alone in the house only for the banging to be returned from the other side of the locked door. It then swings open and shows a child’s bedroom with a rocking chair moving itself. The room looks like it was sixty years old but untouched.

He runs out the room as the dog has ran out onto the marsh and the ghost of the horse and cart crashing returns nearly to swallow the dog into the marsh. He retrieves it and goes back to the house to find the rocking noise has returned with the woman’s screams the child’s bedroom torn apart while the woman flits about the scenes.

Arthur returns to the mainland to hear the story of the lady who had given up her child and returned to see her son who had died in the marsh which drove her mad. Until one day she died ill with a sallowed face. She haunted her sisters house for sixty years. The woman in black walks around the stage as they talk and terrify the audience and only the actor’s eyes follow her. But when she appears local children die. Arthur then leaves and enjoys his life leaving the torturous experience behind them.

Arthur goes out with his family to the fair with his son and his wife. They want to go and ride a horse and trap. Then suddenly the woman in black appears on the stage unveiled and screaming in front of Arthur. His son and wife hit a tree, his son dies instantly and his wife dies later. This is the shock end of the act and the actors discuss they’re on lives and children deciding that the play is ready. The actor asks Arthur how he got the actress to come in and take part perfectly. But Arthur saw no actress throughout the drama. Was the woman in black there for real and would his children survive? 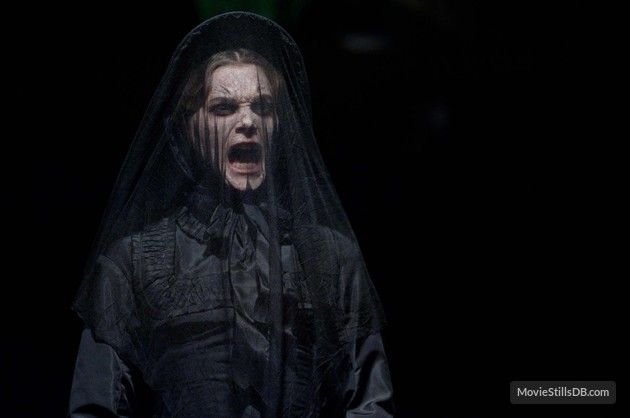 That was the end of the spine-tingling production. I was accompanied with a friend but she constantly had to pee and left me ALONE during the terrifying finale. I would say that the drama and special affects made this show so real but I didn’t find it as terrifying as the film. I was left jumpy and not able to sleep in the dark for over a week. The show has so many twists and turns which makes you jump out of your skin. I would recommend not going alone but it is worth seeing. But don’t go in the dark!

One more note. There is no actress credited in the play……