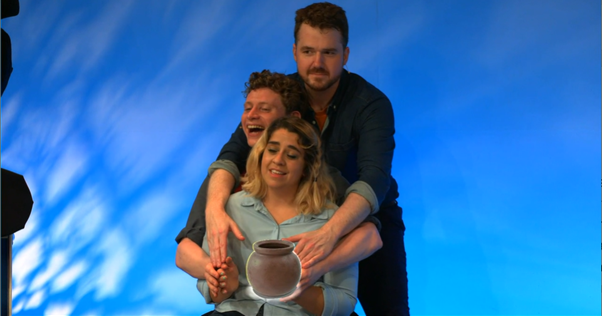 On the streets of Croydon comes our first part of the sequel today. Jezz and James are having a light talking about all their friends tezz, bezz  as one of them walks in looking like he needs the bathroom desperately. The whole show gets started with utter confusion as so many characters enter and start pushing Oscar to the brink of his sanity within the first two minutes of the show. But James and Jez are going to go looking for a beast off the island off the Thames.

On the double date down Croydon cinema, they get interrupted by the posh man who can’t talk and the laboratory ladybird. The worker tries to not name some brands by describing non-branded products but it back fires because she throws so many at her as a joke and they beg her to stop as the joke didn’t work.  The film they decide to watch includes a weird tv presenter gyrating to circus music in front of them. Oscar loses it already, there’s so many parts to this.

Meanwhile off the Thames the monsters on the island; a shark and a squeaky dinosaur are waiting for the scientists to come with some of the worst camera ship in ages. Why is the shark cockney? The monsters while being interrupted by Henry Lewis mucking about behind them the monsters plot to eat them.

Back in the cinema comes a 90s boy band song where the couples sing to each other. Henry Lewis turning to sing about what he likes to Harry Kershaw which might be the weirdest matching in the world. It works out quite well despite the horrendous lyrics escalating into a massive argument at the end. While they argue over who’s go the better relationship the background dates are having a showing off competition for who has a bigger you know what that no one seems to notice.

It cuts to see all of characters finishing up their dates and discover the footprint for a monster which is a shark dinosaur which is what they are going to look for to find the key to solving their research. Bez unlocks the key to discovering who made the creature while being yelled at by Monica. Monica refuses to go in search of the creature that bez created from a laser.  Romulus and Tarquin the ladybird is in search of the monster and Tarquin gets eaten by the lady bird.

Romulus explains how he has one all with his daughter for love as she used to date Bez before he got weird with a crazy scenario being acted out behind them. Poor Oscar is at a loss for what is happening.  The monster returns and gets flattered by Monica while all the men come to her rescue. Oscar cuts in to get a song inserted into the mix about like yourself from a children’s point of view. Basically, like talking to barney, meanwhile the actor has to do the whole thing with sue on his shoulders including the dancing.

But in comes Romulus and takes out the monster at the distress off his daughter. They tranquilise the monster which collapses very carefully to let Sue down. Monica runs back to Bez and they bond over pottery as James joins them for the weirdest date in ages. Meanwhile Romulus is putting the monster on display with Jez. Jez is regretting his actions while Romulus is driven mad by grief and wants to become the creature by taking its skin and injecting it into his skin to become a monster himself. Missing Tarquin the scene cuts with his voice in the background. On that cliff hanger we wait!….